This post originally appeared on the CNCF website. This is a technical deep dive into my Google Summer of Code project. If you want to skip the technical details and want to read about my general experience, jump to here.

Combined with custom controllers, this gives you a powerful way to encode domain knowledge for specific applications (operators) into an extension of the Kubernetes API.

However, there is more work needed to make CustomResources really look like native resources and this is where my project comes in.

Before discussing further, I’d like to mention that none of this would have been possible without the help from my mentor, Dr. Stefan Schimanski. He has been a fantastic mentor and guide!

If you would like to read in further detail, the design proposal, implementation PR and the docs PR are available.

What this means for you

Change in the API

A new field Validation is added to the spec of the CustomResourceDefinition (CRD). OpenAPI v3 schema is used for validation under CRD.Spec.Validation.OpenAPIV3Schema. The language is essentially JSON Schema. OpenAPI builds on that and we use that dialect to be able to reuse the specs for documentation. This way it will be possible to build clients for Java, Python and other languages in the future based on the OpenAPI spec.

OpenAPI provides a standardized declarative specification language. Different keywords are utilized to put constraints on the data. Thus it provides ways to make assertions about what a valid document must look like.

It is already used in Swagger/OpenAPI specs in Kubernetes so client side validation by adding this dynamically to the main OpenAPI spec might come in future versions.

How to use validation

Please note that CustomResourceValidation is an alpha feature in an already beta API. So it is not on by default and exists behind a feature gate. To use this feature, you need to enable the feature gate. This can be achieved by passing the following flag (along with others) to kube-apiserver (Google Container Engine will also allow to create alpha clusters to play with this feature as soon as they support 1.8).

Now that the setup is taken care of, let’s create a CRD:

The schema in the above CRD applies following validations for the instance:

Now that we are clear with how it is structured, it’s time to create the CustomResourceDefinition:

This is an object of kind App which has:

Since it is invalid, we get an error. The last two lines show the fields where validation failed and the schema that these fields must satisfy.

This is a valid object of kind App:

How it works internally

Let’s see what happens under the hood for validation when you create a CRD using $ kubectl create -f crd.yaml.

This was all about validation. Let’s shift focus to Subresources now.

As a part of Google Summer of Code, I also submitted a design proposal along with my mentor, Dr. Stefan Schimanski, to add /status and /scale subresources for CustomResources. This proposal was fun to write and taught me a lot about the existing API semantics! Moreover, it spawned a number of discussions on what the existing API semantics in Kubernetes actually are. If you are interested in contributing to Kubernetes, the design proposal might prove useful to you too.

Just like validation, a new field is introduced in the spec of CustomResourceDefinition - called SubResources. SubResources can be of two types - Status and Scale (in Kubernetes there are some more special purpose subresources, but for CRDs we concentrate on these two).

The custom resource instance is free-form JSON (possibly validated though with CRD validation), so we need to know the JSON paths to spec and status. These JSON paths are mentioned in the SubResources field in the CRD. Hence, we get a spec/status split for CustomResources.

Now subresources can make use of this structure. Let’s take a look at each subresource separately.

In this case, a custom controller can use the status field to inform about the current status of whatever is being managed by it. The controller can write to the status endpoint, updating the .status path in the CustomResource. After this, the whole object is validated again to ensure .status does not contain incorrect values.

There are two common ways to use the scale subresource:

In such a setup, CustomResources can be used to control other resources (like pods). These resources can now be scaled as per the the number of desired replicas mentioned in the spec.replicas JSON path.

After the resources are scaled, a custom controller counts the number of replicas at the current state and writes to the /status endpoint updating status.replicas. This status replica field is replicated to the /scale subresource as well.

It is extremely powerful to have subresources because custom controllers can make use of this to manage resources more efficiently and with much ease.

As I’ve said, I feel really lucky to be working with my mentor, Dr. Stefan Schimanski. He’s been an incredible support throughout the program, and has made it a GREAT experience. I’m really thankful for him for being so detailed and thorough in his answers, and for being so consistently responsive and helpful with any of my questions or concerns. He always gave me useful pointers if I was stuck and provided positive affirmations whenever I overcame a challenge. Not only this, he also helped me to integrate with the community better. I can’t imagine a better mentor!

During GSoC, I also attended GopherCon Denver where I met Konrad Djimeli, another GSoC student from CNCF. We spoke about all the exciting, overwhelming and bewildering moments that we experienced throughout the program. It was nice meeting someone going through a similar journey! 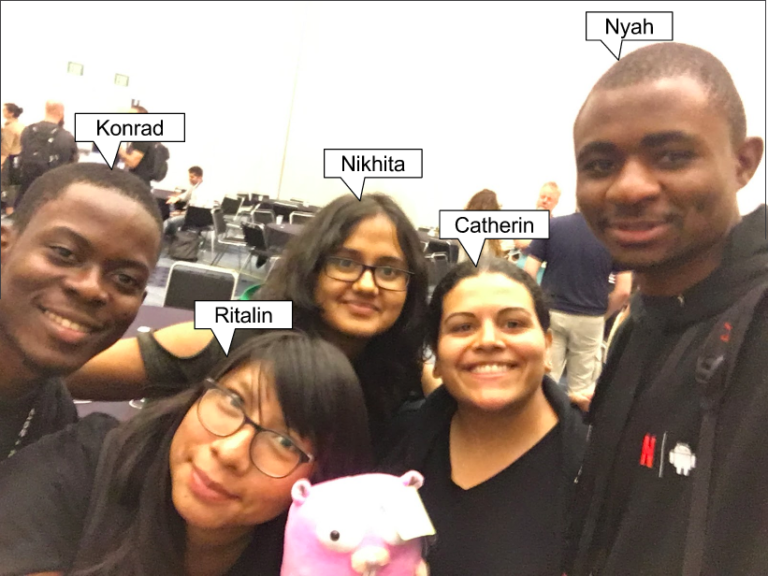 Implementing validation taught me a lot about the tooling around the Kubernetes API - generators, marshalling, fuzzers, protobuf serialization, etc. It took a good amount of learning and effort to implement validation and it felt amazing to see it finally being merged!

Google Summer of Code is an exceptional opportunity for both students and mentors.

All in all, I had great fun and will continue contributing even more. This is just the beginning!

Thanks to Dr. Stefan Schimanski for reviewing drafts of this post.